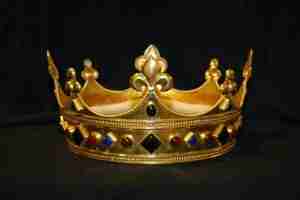 I was reading in the book of 1 Samuel – where Saul was pursuing David. He had become jealous of David and was obsessed with killing him. He hunted him down all over the country. His jealousy was never quenched. To understand Saul’s jealousy, you must know the background. Saul had been anointed the first king over the nation of Israel. He began so humbly – they had to search for him when it was time to crown him. He was unsure of himself and relied on God and the guidance of the prophet Samuel to know what to do and how to do it. But as time went on, he let his fear and lack of true trust in God get the best of him. He began to make choices based on what seemed best to him and not the guidance of the One who knows all. It got bad enough that God said plainly that he rejected Saul as king. He sent Samuel to anoint a new king and David was the man. David showed courage and faith in God that no one else in Israel had when he defeated Goliath. Saul employed him and he helped by playing his harp when an evil spirit tormented Saul (something that happened once God had rejected him). David became best friends with Saul’s son Jonathan – who would’ve been next in line for the throne. David also continued to do battle against the Philistines and God gave him great victories. Saul’s daughter Michal was in love with David. The whole country seemed to be! It was too much for Saul. He turned on him and David had to flee for his life. Everywhere he went, he was hunted. David sought God’s leading as he hid and God protected him. Saul became so caught up in finding David and killing him, that when he questioned a priest who had seen David and gave him food, Saul ordered the priest to be killed along with his entire family. Even his officers would not stoop to doing that! But he was able to find a man who finally would and he not only killed all of the priests and their families, but he wiped out the entire city where they lived – men, women, children and animals. Shortly after this atrocity, Saul hears once again where David has been located and his response was, “God has handed David over to me”. He honestly believed that God would give him what he longed for even though it was evil and against what God had clearly said his will was! As I read that, I was struck by how ridiculous Saul’s thinking had become. And it reminded me that when we allow sin to have a root in our hearts, it doesn’t take long before we can get carried away so far from where we had been. Our thinking is different. We accept things that would have offended us before. We say things that we never thought would come out of our mouths.   And the worst part is that we are blind to our own demise. We think we are ok and those around us are all wrong. Unless God’s Holy Spirit convicts and we listen, we will continue down that slippery slope until we reach rock bottom. God is faithful to show us our error and he longs to redeem us, but it is up to us to listen.

On the other side, we see how David responds. Twice, David had the opportunity to put an end to Saul. Once as he was hiding in a cave and Saul came in to “relieve himself”, David was able to sneak up and cut off part of Saul’s robe. He showed Saul later how easily he could’ve killed him, but chose not to. Another time, he and another man were able to sneak into Saul’s camp and take Saul’s spear and water jug while Saul and his 3,000 men slept. The Bible said God put the men into a deep sleep. The man who went with David took this to mean God had allowed David the opportunity to kill the man who shamelessly and ruthlessly hunted him down. But David would not allow it. He said anyone who killed God’s anointed would not be innocent. Even though Saul had made himself David’s enemy, David refused to treat him as an enemy. He showed great restraint and trust in God that God himself would take care of the situation. “As surely as the LORD lives, the LORD himself will punish Saul…..But may the LORD keep me from harming his appointed king!” – 1 Samuel 26:10a & 11a. What faith he had! Twice he had the opportunity to take revenge and receive his rightful place as king (since he had been anointed many years before). But he never chose to do that. In our human thinking, many of us probably would have done what David’s men encouraged him to do. But David knew God and knew him well. His faith was well grounded and he had a confidence that God would someday, make all things right. What a contrast these two men are! What an example they both leave us….

God takes it seriously when he places someone in a position of authority and they do not honor his commands. As the first king, Saul had a HUGE responsibility placed on his shoulders. But God was there to help and guide. Saul’s primary sin was disbelief. Disbelief in the fact that God was with him and that no matter how things looked, he needed to trust. David had that. His belief in God overcame anything that seemed to scream otherwise. Goliath was no big deal to him knowing God was telling him to fight. He knew God would take care of him. If only we could be more like David than Saul! Both made their share of mistakes, but one was humble enough to admit his sin and seek God’s forgiveness and grace. The other refused to accept that he was wrong. One died in war, the other died in peace.

Our sins may not seem blatant to us – they may seem small and insignificant. But anything that goes against what God tells us in his word separates us from him –no matter how small. And that is something to take VERY seriously. Lack of trust in who God is and what he says to us makes us just as guilty as Saul. As we head into Easter week, let’s examine our hearts and see if there’s anything that is separating us from the God who loves us and asks us to trust him. He’s so worthy of our love and trust! If we will confess, he is faithful. And we will find much to celebrate this week!