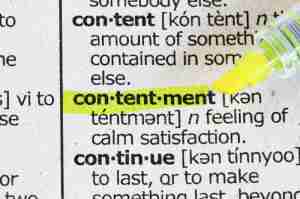 Godliness with contentment is great gain (1 Timothy 6:6). So how content am I? Paul said he had “learned the secret of being content in any and every situation – whether well fed or hungry, whether living in plenty or in want” (Philippians 4:12). The crazy thing is he wrote that from a jail cell! Paul had certainly learned the truth that God is enough and nothing can bring greater contentment than being with Him –no matter where He leads.

In college, I participated in several overseas mission trips. The first trip I took was to Santo Domingo – capital of the Dominican Republic. We stayed on the campus of a Bible college there and worked to help build a new school for the village children. This trip was the first time I remember being so far out of my comfort zone that I was ready to fly home within an hour of arriving! I had been part of inner-city missions in High School, but poverty within the US simply cannot compare with poverty in many other nations.   This was also my first exposure to an organization called “Compassion International”. It was very evident the difference Compassion was making in the little village behind the Bible School. The kids who had sponsors went to school, the ones who didn’t, did not go. Families simply could not afford to send their kids to school without help.

At the school, kids were served a good-sized hot meal at lunch. For most of those kids, that was the best (and maybe only) meal they would receive each day. The village roads were dirt. The houses were shabby and I think very few (if any) had running water. Electricity couldn’t be counted on- it was on and off throughout the day. The first night we were there, we were told we could only drink the purified water they kept on hand – we had to bottle it up even to brush our teeth as just having the water from the sink in our mouths could make us sick. I remember thinking those 10 days would be the longest in my life! But something beautiful happened over those 10 days. I met some of the most joyous men and women and some of the most precious children that gave more to me than I did to them. They loved God and they gave freely of any and all that they had because of that and I was changed by it!

The following summer, I went to Nicaragua — a country I quickly fell in love with and visited 2 more times in my college days. During those 3 trips, I met many people who taught me what it truly meant to be Christ-like – and how to be content and thankful in spite of difficult situations. On one trip, I became very ill on the day we were to leave. I was so sick, I could not stay away from the bathroom (fortunately, my host family did have indoor plumbing). When my host dad realized I was too sick to travel, he drove to the airport to tell the group leader that I (and my sister who was with me) could not go and he would see to it that we got home. He then proceeded to spend quite a bit of time at the airline counter getting us new tickets and demanding that they not cost us anything. It was a headache for him to be sure, but he did it. Then he went to the market to buy me some Pepto Bismol, 7 up, and apples (can you imagine the mark-up on these American products?). When I woke up much later, he was there with those things for me. He also had us call home so our parents would know we would be delayed in coming, but that we were alright. He went to a lot of expense for me even though he did not have a lot to give – especially considering he was unemployed at the time. When we finally arrived safely back at home, we placed a call to his home in Nicaragua to let him know we were home safely as he had requested. I will never forget his compassion for me – as if I were his own daughter. No expense was spared. He simply gave what he had for someone who had a need with no thought of himself – so like Jesus.

On another trip to Nicaragua, the host family I stayed with was by far the poorest of any I had lived with. But they would’ve told you they were so blessed because both the mother and father had jobs in an economy with a 60% unemployment rate. Their home was small and was only 1 room divided by bookshelves. The front part was the living/eating area, the back part, was the bedroom. There were only 2 beds for the family of 4 – a full-sized bed and a baby bed. I’m guessing the 2 boys (a toddler and an infant) shared the baby bed. But while I was there, the father took the older boy and went to a family member’s house next door while the mother climbed into the baby bed with the infant and they gave me their bed. I protested, but they would not hear of it! In this home, there was no indoor plumbing so they gave me a chamber pot to use for the bathroom at night. The first night, I did use it and it was so humbling to see the man of the house empty that the next morning. I decided I would not do that to him (or myself) again so I slipped out back to the outhouse during the next night and quickly realized why no one did that as hundreds of cockroaches scurried out of view of my flashlight! This family also made it a point to clean my feet each night from the dirt roads. In fact, I realized once I got home, the cloth they had used to clean my feet had ended up in my luggage somehow. Anytime I see that, I am reminded that there are people who know how to truly love with the love of Christ. They didn’t have much, but they gave all of what they did have to show me love. They had truly internalized the truth of Matthew 6:21 – “For where your treasure is, there your heart will be also”. They didn’t have much in the way of earthly treasures, but I have no doubt of the treasure awaiting them someday!

In spite of these experiences, I admit I still struggle with contentment. My kitchen is annoyingly small and I’d give about anything to have more space. And I wish that we could take nice vacations every ye
ar (I’m dying to get back to Walt Disney World again!). I’ve also decided that shopping would be more fun if I didn’t have to watch the bottom line so closely. But God keeps reminding me to be faithful where I am, with what He’s given me for now. If He chooses to bless me with an opportunity to travel or to tear apart my house to make bigger rooms, I will be grateful. But if He doesn’t, I want to be content.

After that first trip to the Dominican Republic, I chose to become a child sponsor through Compassion International. It has been a very rewarding partnership. Our denomination (the church of the Nazarene) also offers a child sponsorship program and can be found at http://cs.ncm.org
.

I am grateful for the monthly reminder that I am indeed so blessed! Sometimes a little perspective is all that is needed to remind me that I do want to store up the right kind of treasure so that my heart can be full and content – no matter what my circumstances may be!