Get back up again – Part II 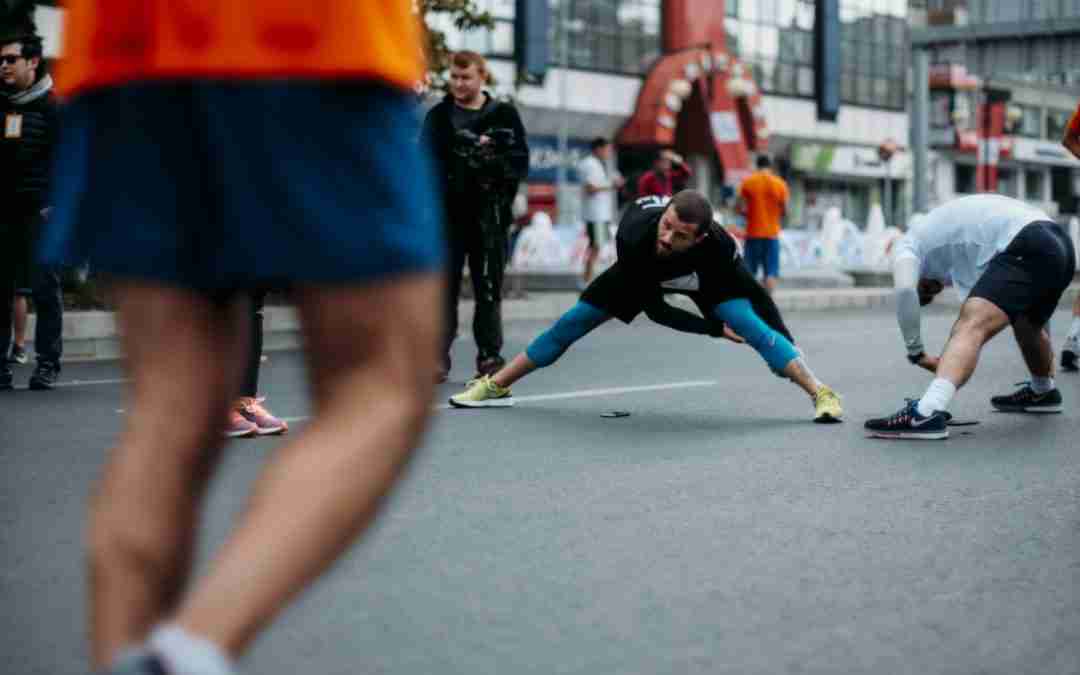 Getting to know your stretchiness

I have never been coordinated enough for sports that involve a ball. I played baseball and loved it. But I wasn’t all that good at it. I tried basketball as well. Again, same result. It wasn’t until I was challenged to run that I discovered how much I liked distance/endurance-related sports like running, cycling, and swimming. What keeps me interested in all three is seeing how far I can go.

But seeing how far I can go never happens if I don’t stretch myself. I’ll never know how far I can go until I move beyond where I’ve been. I find it easy to apply this in my exercise. However, in life, not so much.

I think we all can relate to that statement. It’s not that we don’t want to stretch and grow, but getting there often requires significant change. Many times it requires us to think differently. Time after time, we find ourselves super comfy where we’re already at. It’s familiar. We know what it looks like, what it tastes like, and how it all responds.

The problem is the comfy is rarely challenging. The same goes for the familiar.

As mentioned last week, we’re on a resilience journey. We’ve discovered waiting builds resilience. But waiting isn’t the only activity that raises resilience. Allowing ourselves to be stretched beyond our previous limits does the same. It causes a chain reaction of growth. We gain strength, wisdom, and patience along the journey. But most importantly, being stretched increases our capacity to move beyond where we’ve been.

It’s similar to what happens to the body when running, swimming, or cycling long distances. The body adapts to the load by increasing its capacity for oxygen, muscle capillaries, and overall blood supply, all working together to enlarge the body’s aerobic capacity. This does several things, from making the body more efficient to more resistance to exhaustion.

Short version? Stretching beyond where we’ve been enables us to run farther, swim faster, and cycle longer. And in our lives, being stretched gives us the capacity to push beyond previous limits.

So, what sort of capacity are we talking about? Well, the capacity for openness to God using us is a biggie. Pushing beyond our limits increases our capacity to serve and love, along with the capacity for compassion, patience, empathy, and giving. The list goes on.

But the critical part is our openness. Our willingness to submit. And that’s where our story picks up today.

Here’s the scene. Jesus has ascended into heaven, leaving the disciples with the task of taking the Good News to the ends of the earth. The disciples wait for the Holy Spirit as Jesus instructed. The Holy Spirit arrives right on time (as if he can be late), and Peter gives his first sermon resulting in thousands putting their trust and faith in Jesus.

Enter Acts 3. Peter and John are heading to the temple as it’s the ninth hour. The Jews observed three times of prayer and would go to the temple at these three times, and this was one of those times. Peter and John were both obedient Jews, obeying the appointed prayer times. On their way into the temple, Luke highlights an important character, a lame man, whose been so since birth. Being lame meant no work, and no work indicated no way to provide for oneself. Begging became the way of life, and the best place to do so was at the temple’s gate.

The lame man sees Peter and John and asks for alms – aka gold, silver, or other charity. Peter locks eyes with this dude and commands his attention. The lame guy expecting to receive help hears this from Peter,

But Peter, along with John, looked at him intently and said, “Look at us!” And he gave them his attention, expecting to receive something from them. But Peter said, “I do not have silver and gold, but what I do have I give to you: In the name of Jesus Christ the Nazarene, walk!” And grasping him by the right hand, he raised him up; and immediately his feet and his ankles were strengthened. Acts 3:4–7 NASB

Definitely NOT what this guy expected – it was WAY better!

Now, if you see a guy unable to walk since birth, take a step as if he’s walked his whole life, it gets your attention for sure! And it did for those in the temple as well. A crowd begins to murmur and gather around Peter, John, and their new friend. Seeing yet another opportunity, Peter gives a sermon again, telling them the Good News and adding a few more thousand to the growing number of believers.

Before continuing, the temple guard (basically a high-ranking religious leader), along with the priests and Sadducees, arrests Peter and John, throwing them into jail for the night. The next day, the religious rulers gathered together along with some high-ranking officials. These were the religious experts who studied Old Testament Scriptures – that knew of a Messiah – yet rejected Him. And now they’re about to reject more evidence. This is rather significant to our thought for this post so stick a pin in it for now. We’ll return to this shortly.

Here’s how the trial went down.

When they had placed them in the center, they began to inquire, “By what power, or in what name, have you done this?”

So the leaders recognize there’s power. They want to know what power it is.

Then Peter, filled with the Holy Spirit, said to them, “Rulers and elders of the people, if we are on trial today for a benefit done to a sick man, as to how this man has been made well, let it be known to all of you and to all the people of Israel, that by the name of Jesus Christ the Nazarene, whom you crucified, whom God raised from the dead—by this name this man stands here before you in good health.

Peter points them to the real reason the man could walk – Jesus alone. Now here’s where I find this so captivating…

Now as they observed the confidence of Peter and John and understood that they were uneducated and untrained men, they were amazed, and began to recognize them as having been with Jesus.

They were amazed and recognized that Peter and John were ordinary people. No training. No schooling. Yet the rulers immediately identified Peter and John as spending time with Jesus. Again, stick a pin in this thought. We’ll return shortly.

And seeing the man who had been healed standing with them, they had nothing to say in reply. But when they had ordered them to leave the Council, they began to confer with one another, saying, “What are we to do with these men? For the fact that a noteworthy miracle has taken place through them is apparent to all who live in Jerusalem, and we cannot deny it. “But so that it will not spread any further among the people, let’s warn them not to speak any longer to any person in this name.” Acts 4:7–17 NASB

In the end, Peter and John are released. Neither of them agrees to

keeping their mouths shut about Jesus and not having any other grounds to hold them, the Council releases them.

Let’s head back to running, swimming, and cycling for just a moment. There’s an all-important task needed to reach a greater capacity.

Increasing capacity requires that I remain flexible. To be stretched beyond where I’ve been means I can’t be stiff. For me to stretch beyond previous limits, I have to be flexible.

The same goes for all of us.

Looking back through this story, the religious leaders are anything but flexible. They are inflexible, stiff, rigid, unalterable, and unyielding. They refused to submit to the evidence of Jesus while he was on the earth. They are even more obstinate with the evidence that’s in front of them – to the point that they can’t even say Jesus’ name as they close their trial with Peter and John.

Here’s the thing – these guys are the ONES that should have been rejoicing and embracing the Messiah! Still, even when Jesus was with them, they remained inflexible, stiff, and unwilling to increase their capacity. They were willing to protect the way things had always been at all costs. No new capacity. No stretching. They couldn’t. They were too stiff.

For any of us to increase our capacity for God to use, we must remain flexible to him. God’s desire is to take us beyond where we’ve been, but he can’t do that if we’re not willing to be stretched.

And I’ll be the first to admit it’s not comfy. I’ll often push back on Jesus.

How do we remain flexible

First, let’s examine what it looks like to not be flexible.

It’s effortless to be stiff. It doesn’t demand anything. It’s manageable, painless, and cushy. It’s uncomplicated. All you have to do is, well, nothing other than maintaining the status quo. And that’s where injuries happen in running, cycling, or swimming – when time isn’t invested in stretching – in remaining flexible.

The religious leaders, at once, recognized that Peter and John had spent time with Jesus. They perceived them as having a power they couldn’t understand. And the reason John and Peter had the power to stretch beyond where they had been (remember, they were untrained, unschooled, ordinary people) was precisely because of what the leaders noticed.

They had been with Jesus.

The same goes for all of us. It’s not easily missed when we’ve been with Jesus. Not only do we notice the difference in our own spirit, mood, and heart, but it’s witnessed on the outside in how we reply to others and how we behave and act. Time spent with Jesus positions and prepares the most inflexible parts of our lives to be stretched beyond where we’ve previously been. And when that happens, when we submit, our capacity to be open to God increases. And so does our potential to love, serve, have compassion for, and patience with others. We enlarge our ability to give and be empathetic.

We increase our capacity to be Jesus for those that need him so much. But that’s not the only capacity that increases. Let me give you a little lesson I’ve learned. The more I submit, the more I am open to God, and the greater capacity I have for his peace in my life. And I can’t even tell you, it’s indescribable, how wonderful that peace is.

I can struggle with my emotions from time to time. And usually, that’s a pretty good indicator that I’m growing stiff. I’m running low on peace. It’s time for me to stretch and spend time with Jesus. For it’s him that empowers me to go beyond where I’ve been.

I’ll say this in closing. Breakthroughs come when you’re just about to give up. So don’t. Instead…stretch.