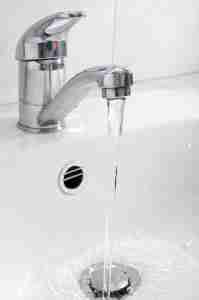 I saw a posting on Facebook earlier this week that said, “God is faithful yesterday, today, tomorrow, always”.  In all of the years of my Christian walk, I’ve not found that to be as true as I have just this past week.  I have learned that God can put His handprints all over a situation, and if we look hard enough, we can see that He is all about being faithful to His children.  This week’s writing is not so much a devotion, but a testimony to God’s faithfulness.

We woke up (or I should say I was awakened) early last Sunday morning to no water in our house.  My daughter was returning from a Christian concert out of state that she had attended with a friend from church and wanted to shower.  Yes….NO water.  We spent a fitful morning with not a lot of sleep.  Help came and an easy fix (or so we hoped) was attempted.  No luck.  The problem was not the electrical connection for the tank in the house.  The problem was much deeper….literally.  It was my well.

The next phone call I made was to someone who had done work for us in the past…in fact, he had helped in the installation of the tank and the pump in the well.  My call to him consisted of four words:  “I have no water.”  He was over to assess the situation which ended up being that the submersible pump that had been in the well for 14 years was going bad.  In order to expedite the process, I sent my daughter over to Mansfield to purchase a new pump.  The promise was made that he would be back on Monday to install, and things would go back to normal.  Arrangements were made for showers to be taken elsewhere and we purchased jugs of water at the store to be able to flush the toilets and water the dog.

Monday morning came and he and a co-worker were at my house bright and early.   I left for work, thinking that the problem would be resolved.  Around 1 p.m., I called to see how things were going.  “Oh, you have water,” he said.  My immediate reaction was to shout hallelujah, but he cautioned me that I’d best not celebrate too much.  It was then that he gave me the news that the 18 feet of water that had been in the well above the pump was now only 6 feet of water.  He feared that the well itself was collapsing and that its days producing water were very limited.  Not good news to those of us wanting to take showers, have clean clothes, and do dishes, not to mention the renter of my apartment wanting to do some of those things as well.

Years ago, the city of Bucyrus had run water lines out by where I live.  Residents could pay a fee and get tapped in to that line to receive city water.   At the time, we had a working well and didn’t think twice about having the opportunity to tie into city water.  That meant a water bill and with a well, who needed one?  But now, the possibility of having to do just that was looking me square in the face.

Tuesday morning, I was determined to call around and see exactly who I had to get in contact with to make this happen.  A call to the city water department headed me in the direction of the county commissioner’s office.  Since the courthouse is just across the street from where I work, I decided I would just walk over and get the information face-to-face.  My trip across the street was for nothing, however.  I was met with locked doors.  Tuesday was…Veteran’s Day.  All of the county offices were closed.

Wednesday was more productive.  I made contact with the commissioner’s office, found out the fee that was needed for the tap-in and got the paperwork started.  All along, I had been in contact with my son who lives in Crestline.  He’s our “go-to” house when we’ve needed to do laundry, take showers, etc. in other times of emergency (think back to last summer’s floods and my basement that was, at one point, filled with 19 inches of water in places).  He had told me to let him know the cost of the tap-in.  Let’s just say it was substantial.  Without the blink of an eye, he told me that he would pay it for me, that he’d been working lots of overtime the last year and just socking the money away, and to just consider this “an early Christmas present”.  When I got the text to that effect on Wednesday, I was sitting in a meeting and did my best not to cry.  I called my daughter once I was out of my meeting and cried in the car telling her about it.  He stopped over later that night to hand me a check and I am quite sure I cried then as well.  Oh, and my daughter’s words of wisdom were, “Well, Mom, miracles and blessings happen every day!  I don’t know why you don’t listen to me.”

Thursday came, and I was at the courthouse first thing, getting the paperwork and the fees in.  I was told that I’ve have to give them the name of the person that was going to do the work for me so that the county engineer could talk to him.  I did so, giving them the name of the guy who’d been at the house the first of the week working on the well.  We figured he could do the work.

Well, I hadn’t been at work for more than ten minutes when the phone rang.  It was the city engineer.  He explained to me that there are all sorts of rules and regs to do with this tap-in business, that the contractor has to have a million dollars worth of liability insurance, etc, etc.  Well, my heart is sinking fast…again.  He does give me the options of a couple of local companies however, that I can call.  One, here in Bucyrus that can excavate and trench up to the house and a second local company can install the line and all that goes with it.  Or, he tells me, there is also a company out of Galion that could do both.  Well, to my way of thinking, that was the smart way to go…more bang for my buck.  My next phone call is to the Galion company,  where the lady takes my information and I stress the urgency of the situation.  She promises someone will get back to me ASAP.

ASAP is Friday morning.  I am at work less than an hour when my phone rings, and it is a guy from the Galion firm.  I proceed to tell him what my dire situation is until he says, “Is this Barb Scott?”  Why yes, it is, I tell him.  He then proceeds to tell me that this is one of the guys who visited my basement quite frequently last summer when it decided to flood twice.  He had recognized the cell phone number and also recognized my work number.  He is probably more familiar with my basement than I am!  I am soon running home to meet him there to let him into the house so that he can scope out the situation.  I get to hear the story of how he had left the old company he was working for and is now working out of Galion.  I am pretty sure I said something to the effect of “well, this was meant to be!”

Another phone call is made to my daughter, who has been just as concerned about this as I have—and more tears on my part are forthcoming as I tell her “You will never guess who came from the Galion company…”  She remembers him as the nice guy who was here a lot a year ago.  She also tells me “whatever it takes, I will help you with this.”  I also called my son again, and when I told him who would be doing the work, he told me they are “good people”.

As I wrote this on Saturday evening and today (Monday), we are still living on “borrowed water”.  We’ve instituted conservation measures:  laundry is not being done as frequently, we space out our showers (did I also mention that we have a house guest living with us?) in order to let the water in the tank build back up, the dishwasher is run only in the early hours of the morning and when it’s completely full, and we are still purchasing jugs of water for the dog.  I fully expect a phone call on Monday morning saying that the Galion company will be able to begin right away.

At the beginning of this past week, I was only seeing the dark side of this situation—and wondering where in the world God was in the middle of it.  As the week went on, I was seeing God make a way where there seemed to be none.  Thank God I listened to the Holy Spirit speaking to my heart to go with that company in Galion, not just because they would be able to do everything needed, but that I would be put back into contact with someone who knew my basement well.  I also thank God that He has given me the privilege to raise two awesome children whom I have seen shine with the love of God as never before.

The more we’ve thought about everything, this move is ALL for the best.  No more products for the water conditioner; no more microbial iron in the water, no more sediment through the shower and discoloration of everything from sinks to clothes to the inside of the washing machine…dependable water when we need it.  And, should I ever decide to sell my house, well, there’s another positive point.  Not only is there a brand new septic system (that’s another whole story), but there’s city water flowing in the pipes!

Besides that, I don’t know why I was worried that God couldn’t show Himself strong in this situation…He’s never had problems with water before!