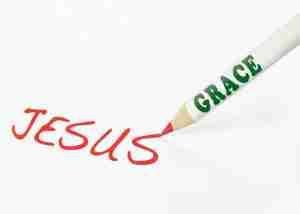 Grace.  Pastor Ray has been dealing with it in his sermons lately, and our focus group on Sunday evening has done a whole multi-week lesson on it.  It’s such a simple word, but so full of spiritual implications.

Move to the New Testament.  The word becomes charis.  Here, it’s all about salvation.

Jesus, through the miracle of the Virgin Birth, was God putting skin on and coming to Earth to teach and preach about His Father’s unfailing love and grace.  All along, through both the Old and the New Testaments, God longed for a relationship with His people.  Time after time after time, He poured out His grace on a nation who was stubborn, rebellious, and, let’s face it, at times, very unloveable.  By their actions, they didn’t deserve God’s grace, but there it was time and again.  The unmerited or undeserving favor of God for those who didn’t deserve it.  It was God’s love in action.

God’s ultimate action of love for mankind was to send His son in this season to us so that we could be reconciled back to Him.  He gave up His only Son…just for you, just for me.  2nd Corinthians states it well:

“God hath made Him to be sin for us, who knew no sin, that we might be made the righteousness of God in Him.”

Before Jesus came, there was the law of Moses.  What started out as instructions from God as to how to live (the 10 Commandments), and the setting up of the priesthood and observances of festivals and atonements, eventually became extremely corrupted by man’s influence.  While the Mosaic law revealed man’s sinful nature, it offered no way of personal redemption or forgiveness.  Even the Pharisees and the Sadducees couldn’t agree on interpretations of “the law”.  Much of their beliefs centered around duties, traditions, and rituals…in other words “religion”.  And then, of course, there was that whole “Jew” vs. “Gentile” thing.

God put skin on in the person of His Son, Jesus Christ to redeem the world.  Jesus is love in action, faith in action, grace in action, a true representation of God’s love for man.  Jew or Gentile, it didn’t matter to God.

“This righteousness is given through faith in Jesus Christ to all who believe.  There is no difference between Jew and Gentile, for all have sinned and come short of the glory of God, and all are justified freely by his grace through the redemption that came by Christ Jesus.”

All who believe.  All have sinned.  All are justified.  All receive the grace of God through Christ Jesus.  And I love that the Bible states it that way.  “Christ” means anointed.  Jesus was The Word.  We receive grace through the Anointed Word.  That Anointed Word became flesh and dwelled among us!

In our Sunday night focus group, we learned that grace is not just a word—it’s an action.  We don’t just receive it.  God expects us to give it as well.  Perhaps it’s giving favor, forgiveness or love to someone that we believe doesn’t really deserve it, but God works in our hearts and spirits to remove that issue that’s become a stumbling block for us.

I can personally attest to that principle in my life this season.  God has dealt mightily with me on an issue of unforgiveness.  Letting go of that sin has opened the windows to blessings that I never thought possible.

God’s grace…it’s great to receive, and wonderful to give as well!