I love the altar 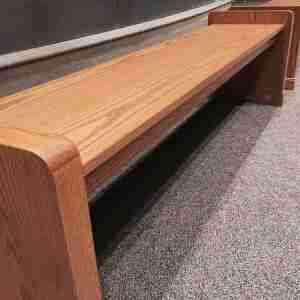 There’s no place like it. Certainly I can pray wherever I am. In fact Paul tells us to pray without ceasing which tells me to pray many other places than in the sanctuary of my church. But ya know, there’s just something about the altar.

To discover the reason, let’s head back in history to the Old Testament. The word altar in Hebrew means a place to sacrifice or a place to slaughter. The very first altar mentioned in the Bible was built by Noah after God delivered him and his family from the flood. Noah, upon exiting the arc, built an altar and then sacrificed to God one of every clean animal and bird.

“Then Noah built an altar to the LORD, and took of every clean animal and of every clean bird and offered burnt offerings on the altar.” Genesis 8:20

Moses must of thought this was a good idea too (just a joke – laugh – its healthy!) so he built an altar as well and offered sacrifices after Israel’s deliverance from Egypt on Mount Sinai.

“Moses wrote down all the words of the LORD. Then he arose early in the morning, and built an altar at the foot of the mountain with twelve pillars for the twelve tribes of Israel.”
Exodus 24:4

Both of these altars were in response to God’s deliverance. God’s saving grace was energized on fallen man out of great love. Something else these altars had in common was that each had an animal slaughtered and sacrificed on them for a specific purpose. Think about it – death isn’t something pleasant to think about let alone witness. I love to bow hunt, but I don’t like to see any animal suffer. So offering a sacrifice on an altar, I’m sure, wasn’t the most pleasant experience! It directly involved a person taking the life of an animal.

The obvious end would be the animal losing its life. The act of slaughtering an animal was done to remind man that HE ought to be the one on the altar losing his life, not the animal. It was the animal taking HIS rightful place. Both of these altars were built in response to God’s deliverance, but more importantly, they provided a place where mankind met the mighty mercy of God. God chose NOT to give mankind what mankind deserved.

Altars had another purpose. Looking further into the Old Testament, we see that there were other times altars were built to commemorate significant events in someone’s life – a deep encounter with God. These God encounters were not flippant, but tangible experiences with God that changed the life of the one who encountered God.

Let me make this clear – ANYTIME anyone has a tangible experience with God it changes us. Abram and Jacob both experienced encounters like this. And they both left different than before their encounter with God.

“The LORD appeared to Abram and said, “To your descendants I will give this land.” So he built an altar there to the LORD who had appeared to him.” Genesis 12:7

God appeared to Abram. God spoke. And Abram wanted to DO SOMETHING in response! After all this was an encounter with the God of the universe! So Abram built an altar!

Jacob, you guessed it, thought this was a good idea too! So he built an altar to God because God had revealed Himself to him.

“He built an altar there, and called the place El-bethel, because there God had revealed Himself to him when he fled from his brother.” Genesis 35:7

This past February, I was hunting in South Carolina and inside the blind I had one of these encounters. I think it is important to mention that I was, on purpose, seeking it! No I didn’t build an altar, but I did take pictures from the perspective of the blind. I needed SOMETHING to remind me of what God had to say and my response to Him. These are AMAZING experiences and are available to all of us. All that is required is for us to remain close to Him, faithfully and daily carving out time for Him and responding to Him when He speaks and reveals Himself to us.

Back to Abe and Jake. They both built altars in response to having an encounter with God. You know, a few paragraphs up, I used the word significant to describe these God encounters. I’d like to make one thing extremely clear.

ANY ENCOUNTER WE HAVE WITH GOD IS SIGNIFICANT! There will never be one that isn’t significant!

God is holy, righteous, and perfect. These encounters should at minimum humble us as we don’t deserve them! Remember, WE are the ones that were supposed to die for sin, not the animals (and ultimately His Son). Often we only see the image of God being this big loving guy that loves everyone and wants all to live with Him in heaven. That image is only partially accurate.

He is God. Period.

He is perfectly holy. He cannot be near sin. Further, the wages of sin is what? Death. Let’s restate that. The wages of my sin is my death – and not just a physical death, but spiritual death – separation from God forever. Yes, God loves everyone, but that’s not a CRUTCH to be used to live how WE desire. We live how God desires. We should NEVER live so far away from the time and place of our own salvation that we forget the immensity of it! Time mustn’t dull it! His forgiveness of our sins is so complete it ought to humble us.

Well, so far, I’ve only pulled altar examples from the Old Testament. What about the New Testament? This is where I get all giddy!!! This gives me those little blessing bumps (not goose bumps) all over just thinking about it!

“We have an altar from which those who serve the tabernacle have no right to eat.” Hebrews 13:10

The context of this verse is that there was a wrong teaching that the author of Hebrews was dealing with that stated the Old Testament sacrificial system and rituals were still required for salvation. Rewind back to the animal sacrifices I mentioned earlier. Animal sacrifices were done as placeholders for where man should have been. Therefore, deliverance was carried through by the death of an animal, not man.

But there was a problem with this system and with the teaching of it in Hebrews. An animal only offered a temporary solution. Once the animal died on the altar, it stayed dead. The animal never came back to life and it’s blood died with it.

The altar that the author refers to, metaphorically then, speaks to the benefits of the cross, the sacrifice and slaughter of God’s Son! It is a place to receive mercy and grace. It is a place to meet with God.

Grace and mercy are like this. Mercy is like a child that has been the worst ever behavior wise, but the parent doesn’t give the child what he/she deserves – punishment. Grace is that same circumstance, only on top of not punishing, the parent also gives the child the best gift ever all! The child did nothing to deserve the gift and in fact did the OPPOSITE of deserving it. But the parent gave it anyway.

That is you and I. God did not give us what we deserved, but instead gave us a gift that we could never deserve or be worthy of.

In awe of this and in what He did in taking my sin upon Himself and trading that sin for His righteousness, I respond in worship and kneel down at the foot of the cross! It is the place that I go to refresh what my salvation cost and how great the sacrifice was to deliver me from sin.

Don’t let a stigma surround the altar. This stigma states that the altar is a place where “bad people” go. It’s stupid really. We sit in the chairs (or pews) of church and judge those that kneel down at the altar and wonder…

“Wow, I wonder what they did?”

How wrong is that? That becomes a wall that keeps us from kneeling at an altar because we don’t want others to think that about us too! How insane!

Indeed, the altar is a place to go where we can straighten our relationship with God and seek forgiveness. And yes, it is NOT the only place this can happen. Seeking God can happen anywhere.

But the altar is more! It is a place set apart for just this purpose! It’s only purpose is to be a place to meet with God and for God to meet our needs! And those needs might just be to worship Him, to seek forgiveness, or to lay down some burdens at the foot of the cross.

I want to close this by going back to my original question that started this whole thing. Why the altar? The list is long, but here goes!

Bottom line – it is a place where I on purpose seek and encounter God.

I’m not trying to make anyone feel guilty. But the next time you are in church and you see the altar, think about what it represents. If in worship, you feel God drawing you out of your seat, respond to Him, throwing off anything that would keep you from meeting with Him in that moment. If your burdened with a heavy load, why not seek relief at the altar. And if at the time an altar call is given, and you feel that feeling that makes your heart jump and you feel God moving you – respond. It’s what the altar is for! God wants to change us no matter the circumstances! The change may happen as we worship at the altar and the change may happen as we seek Him correcting our course or Him guiding us in difficult circumstances.

Above all, see the altar as a place designed and purposed to meet with God and for God to meet your needs – whatever they may be.