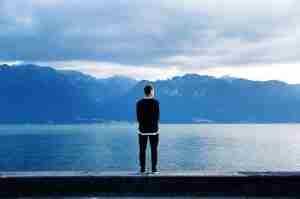 “Who Stood with You? was the title of Pastor’s sermon this past Sunday.  It centered around the apostle Paul, and some of his last communications with Timothy, who was his spiritual son.  Paul enumerates those who were once strong in their faith, but for one reason or another, abandoned both him and, untimately, their faith.

​I understand fully about have a world rocked to its very core.  But I am thankful that, along the way, God placed in my life women who were rock solid, when it came to speaking God’s Word.  I count it a blessing to know women who are in the same circumstance that I have found myself in.  They have listened to me talk, held me when I’ve cried, provided companionship when needed, and, most importantly, they’ve prayed for me.  They have stood beside me.  My sorrow was theirs as well.  So much for that first definition.

​The meaning of the second definition came to me tonight as I was driving home from church.  I was praying as I drove—my car is usually a fairly quiet place where I can take the time to just talk out loud to God like He’s sitting next to me in the passenger seat.  I was thinking about all the things that He is to me, things that help me to endure or withstand:

He is my strength when I am weak.

He is my comforter when I weep.

He is my rock when I am unsteady.

He is my calm in the midst of the storm.

The final definition of the word “stood” is to take a stance.  There are circumstances in my life that I have made the decision to take a stand for  This decision has sometimes involved hard choices, ones that would not make sense in a normal way.  But God gently reminds me that in His time (not mine) and in His way (not mine), He will be faithful to His word .  I just have to have faith in His ability, and sometimes that “faith”concept on my end can seem like a huge stretch.  I have to remind myself, almost daily, that God’s Word is His Will and His Will isspelled out in His Word.  I also know that, according to Romans 8:34:

“…Christ Jesus is the one who died—more than that, who was raised—who is at the right hand of God, who indeed is interceding for us.”  (NIV)

​I like how different translations interpret a particular word in this verse.  Not only is Jesus interceding, He is pleading, praying, mediating, representing, making entreaty, advocating for us.  He’s standing with us…and for us.  He’s our Advocate, our Defender, pretty much the best lawyer we could ever want!

​And not only does Jesus intercede for us, but we also have the Holy Spirit.  He comes alongside of us and comforts us, speaks to us, and strengthens us, sometimes carrying us if need be.  It is when words fail us that the Holy Spirit carries our words to God’s ears.  Charles Spurgeon stated it well when he said:

​“I pray you never think lightly of the supplications (prayers) of your anguish.  That which is thrown up from the depth of the soul, when it is stirred with a terrible tempest, is more precious than pearl or coral, for it is the intercession of the Holy Spirit”