What happens when God tears you down? 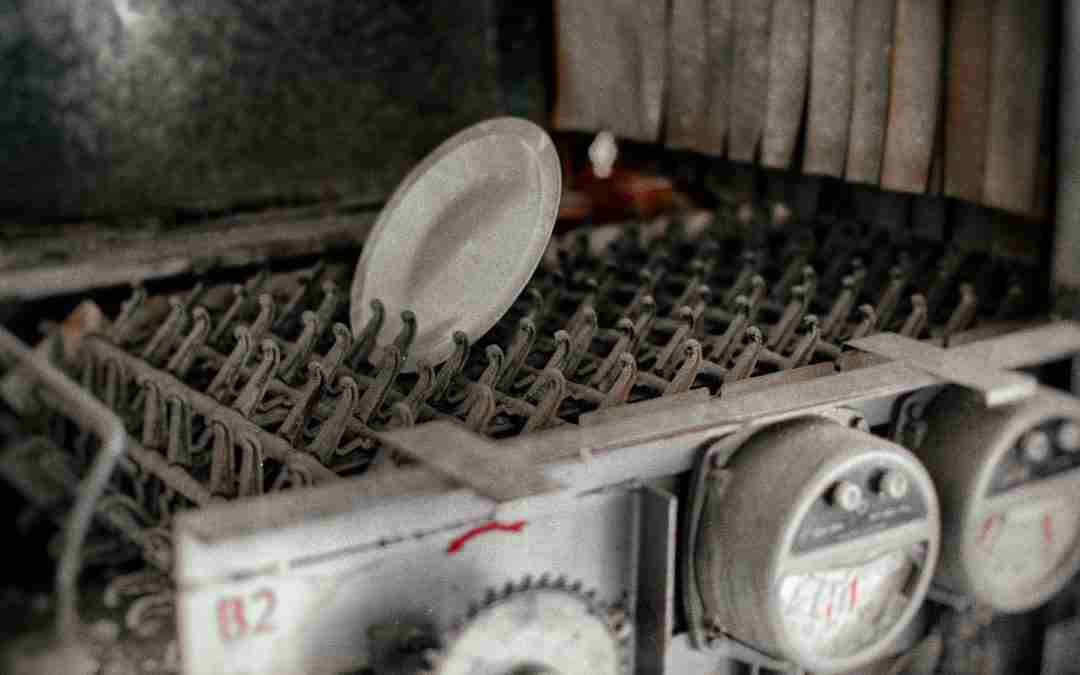 I’ll bet that title got your attention — ahem…that was kind of the purpose!

Let me tell you a story

We’ll get to the title in a bit. First I want to tell you a story about my dishwasher. It’s a fascinating tale of love and hate, of frustration and elation.

Right now, there’s no love and definitely no elation!

So, we’ve had our dishwasher now four years. In my book, that’s not old. I’m 44 and I don’t think I’m old, regardless of what my kids say. Sure I have parts of me that are sore in the morning, but I’m good to go after I stretch. My point? Four years old for a dishwasher is not old.

Right now it’s leaking. But that’s for a different post. Today, I’m going back to when it wasn’t cleaning. Which is sort of the point of having a dishwasher. I mean, who wants to open up the machine after its ran only to find the dishes wet and still dirty. Let me tell you, no one does! It’s frustrating to pull out the dishes you lovingly trusted the dishwasher to clean only to wash them…by hand…dry them…by hand…and put them away.

I’m spoiled. Maybe we’ll deal with that in another post.

So, I did my research. Sure I have a repair guy I can call, but I’ve got my ego to protect. My pride. My manhood. I was determined to fix this myself. My wife doesn’t understand manhood. She just wants clean dishes and suggested on multiple occasions to call my repair guy, to which I lovingly replied, I’m your repair guy.

That didn’t get me very far.

She just gave me that look. You know the one I’m talking about. It’s the “really?” look. It’s the one she also uses on the kids when she doesn’t believe the story they are telling her. Somehow, it gets the truth out of my girls. It’s a spiritual gift only given to moms. I’m firmly convinced of that.

But hallelujah, praise Jesus, it doesn’t work on husbands!

So, I ordered the part. Three days later it arrived. I was so excited I couldn’t contain myself. I watched my YouTube video again just to make sure I knew what to do. I figured, I’ll be done before we even get to dinner time. An hour tops! I was now an expert thanks to YouTube.

After struggling for the first 45 minutes just to get the dishwasher unhooked and out from underneath the counter, I spent the next 45 minutes trying to find the right pieces to take off to get the offending part that was leaving my dishwasher unclean.

No joke, I think I had the entire underside of the dishwasher tore down before I finally reached the little bugger that was now becoming the bane of my existence. I pulled that sucker off the dishwasher and stood to my feet as though I was Indiana Jones and found the Holy Grail. I lifted it high above my head and shouted, or maybe I grunted, in victory! I had torn the dishwasher completely apart! I swear a shaft of light shone down through my roof and onto me!

Nicky walked into this scene, looked at me, sighed, and said you still have to put it all back together. No problem, I replied! I got this!

I grabbed the replacement part, and began the work of putting back together what I had torn down. It took me twice as long as it did to get to the point where I stood victorious, but I successfully tore down the dishwasher, replaced what was broken, and then put it back together.

It wasn’t just fixed. It was better than it was before because I fixed it!

Jesus didn’t have a dishwasher

But he did have a lot to say about tearing things down and building them back up.

In the second chapter of John’s Gospel, he records Jesus’ response when entering the temple during Passover. People from all over traveled to the temple for this time of the year. It was a time they would offer a sacrifice. It was the time that they would be seeking after God, coming to the temple to worship him. It was a big deal. And when they entered, they saw nothing that resembled worship.

Instead, it was a place of exchanging currencies. Exorbitant fees were charged for getting the right currency. Why exchange? Because when travelers arrived at the temple, if they didn’t have a suitable sacrifice, they’d have to buy one…also at an exorbitant price. So, they had to exchange their foreign currency for temple currency, that came with a high price.

Those responsible for the temple created a problem for the temple by building barriers for people to come to God. And it didn’t make Jesus happy. This was his Father’s house. And these were his Father’s people trying to come to him. I can only imagine the look in Jesus’ eye as he turned over the money tables of those exchanging currencies and knocked over the cages that held sacrifices to be purchased. This all stood in the way of God’s work with his people.

Jesus’ actions, for obvious reasons, got the attention of the religious leaders in the temple. They came out and questioned Jesus. Here’s what they said.

But the Jews were upset. They asked, “What credentials can you present to justify this?” Jesus answered, “Tear down this Temple and in three days I’ll put it back together.” (John 2:18–19 MESSAGE)

They probably laughed at him. Really! They looked around at their temple, which really wasn’t theirs anyway, and retorted, it took 46 years to build the temple! There’s no way you’re going to tear it down and put it back together. You’re crazy, Jesus! No way can you rebuild it after it’s torn down. Especially in three days.

The next verse gives us a clue, as to what Jesus was really saying. But it’s sort of dual layer. The next few verses tell us Jesus was referring to his death and resurrection, his body as the temple, which God would raise three days removed from Jesus’ crucifixion. I’ll bet the disciples, shortly after the resurrection, recalled this moment for sure! They were probably all like,

“Remember that time when Jesus got angry in the temple? What was it that he said? In three days he would what? Oh yea, raise it up and put it back together. Wait…how many days was Jesus in that tomb?”

But remember what I said earlier – that Jesus’s statement to the religious leaders was layered. Jesus was absolutely referring to himself. But he was also revealing a bit of prophesy.

In AD 66 (long after Jesus’ ascension), the Jews began to revolt against the Roman Empire. The short version is the Jews had enough of the Roman’s presence in Jerusalem. So, they threw them out. As you can imagine, this didn’t go over well with the rest of the Roman Empire and four years later, the Roman emperor Nero sent Vespasian to not only stop the rebellion, but destroy Jerusalem, and yes, the temple. It was torn down, burned, destroyed, desecrated.

This time was messy time for all in Jerusalem, Jews and Christians alike. Some followers of Jesus died in the siege. Some were taken prisoner, tortured, and later executed. But there were some that escaped. They carried with them the Gospel of Jesus. Implication? The gospel spread. It disseminated throughout the surrounding countries despite its hated status. People who’d never heard about Jesus were hearing about Jesus. People who were nothing like the Jews began to follow the ways of their Messiah. The temple was torn down. The religious epicenter in rubble. But God was rebuilding something new out of what was torn down. Jesus introduced the new. Now the followers of Jesus were carrying out the new.

God was tearing it down. The old way was gone. Something new was coming. And God was in the business of building something up much better in its place.

It was the same with Jesus’ crucifixion. He was torn down. Body beaten like a piece of meat. Nailed to a cross. He hung there, slowly dying, slowly suffocating, broken. But something had to be torn down before it could be rebuilt and made new.

And three days later it was. Hallelujah praise God it was!

God’s in the tearing down business

In order for God to get us from where we are to where he wants us to be, he’s got to do some demolition. He’s got to tear down so that he can put back together, making us more humble, more loving, more caring, more sensitive, and better equipped to let others know about Jesus. It’s all about making us more like Jesus.

I can recall a couple of times in my life where God has just obliterated me. He’s blown me up and I’ve felt as though pieces of me were scattered. I felt like I was a mess. And truly, I was! Even more of a mess than my poor dishwasher was…before I fixed it!

But I was a beautiful mess. My dishwasher was just ugly!

The beauty came when I began to see that God was putting me back together. He was reforming me. Reshaping me. Restructuring me. Something had to be torn down before it could be rebuilt. And thank God he never gave up on me even when I wrestled with him. He never stopped putting me back together. Even though I felt like I was breaking apart, the whole entire time God was breaking through.

It seems so unloving, I know. Maybe even cruel. But it’s not. In fact, it’s just the opposite. To be unloving would mean leaving us as we are. He loves us too much to do that. He desires to shape us to become who he sees we can be. It’s not a one-time event, but an ongoing, present-day appointment of becoming more like Christ. Here’s the thing. We are responsible for our part. God will do his, but we have to do ours. And what is our part?

We have to respond to him obediently, giving him permission, accepting and trusting that whatever happens, he is always FOR US.