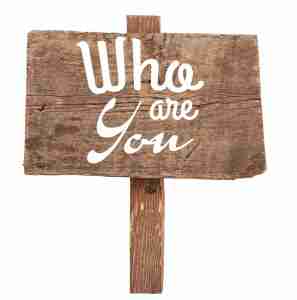 Pastor LaSalle’s message last Sunday concerned the signboard that hung above the head of Jesus at the crucifixion.

According to history and tradition of the day, this board detailed why He was being punished, but, in the case of Jesus, it also detailed who He was, His identity.  The Pharisees missed it…the Sadducees missed it.  The Jewish people, by and large, missed it as well. Only one of the thieves who was hanging at the side of Jesus knew who He truly was.  He was not dying for the crimes He had done…He was dying for who He was.

I had been mulling all of this over since Sunday, waiting for God’s still small voice to speak to me about what to write in this devotional.  And, in the midst of my working on our weekly Bible study lesson this week (on Jonah), God drew a parallel from the story of Jonah on our identity, specifically our identity in God.

Jonah was a prophet of God who was running from God.  God had a plan for his life, but Jonah was only interested in going in the absolute opposite direction.  God had plans for Jonah to be a “redeemer” (His name for him) to the people of Ninevah, a type of Christ, if you will.  He was to preach repentance to the people in an effort to save the city.

In an effort to get as far away from Ninevah as possible, Jonah charters a boat, and soon discovers that he cannot escape who and what God has called him to be.  God sends the storm of all storms to literally rock Jonah’s boat.  Jonah knows who he is and deep down, he knows what he’s supposed to do:  he has a mission and a message.  In an effort to get to the bottom of this rocky voyage, Jonah’s shipmates try to discover who he is:

“So they asked him, “Tell us, who is responsible for making all this trouble for us? What kind of work do you do? Where do you come from? What is your country? From what people are you?”

All of these questions in an effort to figure out who Jonah is and why he had upset their world.    These questions were probably not unlike the ones the leaders of Jesus’s day asked Him, trying to figure out who He was and why he had upset their world.  It was all spelled out in the prophecies from the Old Testament.  But, they chose to ignore them…and Him, preferring law and religion over a personal relationship with the Creator.

What is your identity in God?  The Scripture tells us that He knew us before we were even born and that He has great and good plans for us.  Just like Jonah when he called out to God from the belly of the great fish, just like Jesus called out to His Father in prayer, so can we call out to God.  He can redeem us, renew us, and restart a life gone wrong and show us who He wants us to be.  He wants to give us a new name in His kingdom.

I was also reminded of a song today that goes right along with the thoughts of this devotion.  It’s one we sing in service from time to time:

I have a Maker, He formed my heart

Before even time began, my life was in His hands.

He sees each tear that falls, and hears me when I call.

I have a Father, He calls me His own.

He’ll never leave me, no matter where I go.

He sees each tear that falls, and hears me when I call.