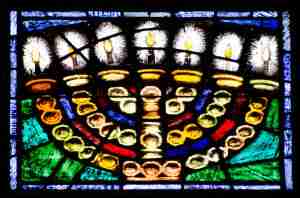 I don’t exactly recall what grade I was in so please forgive me if I butcher this memory! I remember a class in grade school where we built this water toy / experiment. Little buckets had rods ran through them towards the top and they were organized in such a way as the one below was just off to the side of the one just above it. And the rod that was through the buckets above were just off center. This was organized in a sort of zig zag pattern that was taller than I was (but honestly it didn’t take much to be taller than I was – still doesn’t!)

As a student, I wasn’t quite sure of what was going on. But I listened and did my part along with the rest of the class as the teacher instructed us.

This continued until the teacher had exhausted the bucket of water she had in her hand.

In Zechariah 4 we find a similar scenario. This is the fifth vision given to Zechariah. Let’s take a look at the first three verses.

Zechariah 4:1 The angel who was speaking with me then returned and roused me as one awakened out of sleep.

Zechariah 4:2 He asked me, “What do you see?” I replied, “I see a solid gold lampstand there with a bowl on its top. It has seven lamps on it and seven channels for each of the lamps on its top.

Zechariah 4:3 There are also two olive trees beside it, one on the right of the bowl and the other on its left.”

Zechariah 4:5 “Don’t you know what they are?” replied the angel who was speaking with me. I said, “No, my lord.”

The angel speaking to Zechariah asks a critical question? Zechariah recognizes the object in his vision as a lampstand, but it’s unlike any he’s seen, so he answers no. The angel replies,

Zechariah 4:6 So he answered me, “This is the word of the LORD to Zerubbabel: ‘Not by strength or by might, but by My Spirit,’ says the LORD of Hosts.

It was by the priests strength and might that the lampstands in the tabernacle continued to burn, but this lampstand would prove different. It wouldn’t be by man that would keep this lampstand burning, but by the Holy Spirit.

Where man needed to continuously refill the lampstand in the tabernacle, this lampstand never needed refilled. There was an inexhaustible supply that provided 24 hours a day 7 days a week.

It is never by man’s own strength, knowledge, or might, but by the Holy Spirit that man can accomplish the things ordained by God. All that is required of man is that he respond in obedience to God.

Where the water bucket was emptied in my grade school class, God’s Spirit, when poured out, never reaches empty. He continuously fills us with exactly what we need to accomplish what He has for us. On our own, we are frail, weak and accomplish little that has any lasting results. But that all changes when we respond Him and are Spirit led.

Zechariah 4:7 ‘What are you, great mountain? Before Zerubbabel you will become a plain. And he will bring out the capstone accompanied by shouts of: Grace, grace to it!’”

Zechariah 4:8 Then the word of the LORD came to me:

Zechariah 4:9 “Zerubbabel’s hands have laid the foundation of this house, and his hands will complete it. Then you will know that the LORD of Hosts has sent me to you.

This vision given to Zechariah was to encourage Zerubbabel. Years before this vision, Zerubbable had began work on rebuilding the temple by laying its foundation. Construction was stopped by surrounding nations. His hands had yet to complete the work given to them.

On top of the setback, Zerubbable had a congregation of people with mixed feelings about the changes going on in the rebuilding phase when he laid the foundation.

Ezra 3:12 But many of the older priests, Levites, and family leaders, who had seen the first temple, wept loudly when they saw the foundation of this house, but many others shouted joyfully.

Ezra 3:13 The people could not distinguish the sound of the joyful shouting from that of the weeping, because the people were shouting so loudly. And the sound was heard far away.

Some longed for and wept over how things used to be – how they where in the first temple. Other’s shouted joyfully at the prospects of a new beginning! The shouts were so mixed that all that was heard was shouting, and it could not be distinguished.

As a church, we just came through a big change from one “temple” to another when we moved into the new sanctuary. But the changes aren’t over. We are facing more – changes in staff, teachers, programs, changes in who leads what and how. In fact it may even feel as though the only constant right now (besides God) is change.

How true that is.

1 Peter 3:8 Finally, all of you, have unity of mind, sympathy, brotherly love, a tender heart, and a humble mind.

Unity here doesn’t mean we all begin to think alike or adopt each others tastes in music or color of wall paint.  What it means is this.  We all believe that God sent His Son to the earth.  Jesus died on a cross, was buried, and rose three days later and sits at the right hand of God and is ready to receive any who will accept Him.  Unity is saying that while we may not agree on the color of wall paint for the new bTweens room at the church, we all can agree that the church (us) is here to win souls for Him – to reach the lost and keep souls out of hell.  That’s unity at its finest – all coming together for one common purpose…winning souls for God.

As a church, unity is critical for success in our mission – building up kids, youth, and adults, changing lives, touching souls, reaching the lost.

The devil desires to so distract us. Remember, the devil hates God. And even as much as he hates God, he cannot attack God directly, so he will attack the one thing God loves so much – you and I – the church. The devil will do all he can to disrupt unity in the church and capitalize on each opportunity he has to do so. There’s a lot going on right now at our church and many questions are in our minds due to so many unknowns.  And the devil wants to distract us from the mission God has for us – winning souls for His kingdom – and he will use these as distractions.

In my story of the water experiment, I didn’t quite understand what was going on, but I trusted my teacher. I trusted that she knew what she was doing in spite of my not fully understanding.

In the story of Zechariah and Zerubabble, the people probably didn’t understand the why behind God’s timing or reasoning. They didn’t understand why the foundation sat there, untouched, for so many years. If I can just take a guess, I’d say they probably thought Zerubabble had done something wrong in the eyes of the Lord that was causing the setbacks. However, all they needed to do was trust the leadership God had placed over the project. God ultimately was in control, just as He is today. Nothing happens outside of His vision. He sees from one side of eternity to the other.

As a church, we have a godly board that sets policy based on godly principles. We have a staff, under the direction of our Pastor, that takes that policy and puts it into place. None of this happens by accident. It’s on purpose. And that purpose is simple – to continue the work that began in Acts – building up Christ’s church.

One other note on the oil in the lamp.  With oil being symbolic of the Holy Spirit in mind, what does oil provide to an engine in a car?  Lubricant – right!  Oil prevents friction from damaging the parts in the car’s engine.  Without oil, friction would eventually cause a fire.  As Christians, we can be the oil that prevents fires within the church when we allow ourselves to be channels for the Holy Spirit to work through.  We can prevent fires from burning down the church – and by church I don’t mean the building, rather, ourselves.

Trust the leadership of your church. They aren’t there by accident. God has so purposed them to serve to the best of their abilities. There maybe things that leave us not understanding the why. But we can always trust the Who. Christ is and always will be in charge of His church and He will see it through to completion, providing all that is needed.

Philippians 1:6 And I am sure of this, that he who began ha good work in you will bring it to completion at the day of Jesus Christ.

All that’s required of us is to respond to Him in obedience and trust in the Good Teacher!

Oh and just to let you know – what Zerubabble  started – God saw to its completion.  We find that in Ezra.

Ezra 6:15 and this house was finished on the third day of the month of Adar, in the sixth year of the reign of Darius the king.
Ezra 6:16  And the people of Israel, the priests and the Levites, and the rest of the returned exiles, celebrated the dedication of this house of God with joy.